Why place a golf course so close to an airport?  It provides opportunities for afternoon rounds on arrival days or morning rounds prior to a flight home.
With fewer visitors electing to rent cars of their own and instead utilizing ride-sharing services, the wallet-friendly shorter distances are an added bonus.

Pine Lakes Country Club, known as “The Granddaddy” has recently undergone a renovation of their greens and bunkers with wonderful aesthetic and playing improvements.  The history buffs among you already know that Pine Lakes (top photo) predates the Myrtle Beach airport by nearly 50 years. The course opened in 1927, while the terminal at MYR wasn’t unveiled until 1976 (prior to that there was a joint-use arrangement with the Air Force). The full appreciation of the course and airport, though, wasn’t realized until 2002.

That’s when Grissom Parkway – named for former mayor Bob Grissom – was finished. It connected the non-resident entrance of Pine Lakes to north end of the airport property, leaving a straight line from one to the other only a handful of stoplights away.

Brent Moore says: “The course is in GREAT SHAPE. Put it right at the flag with LESS speed than ever before.” 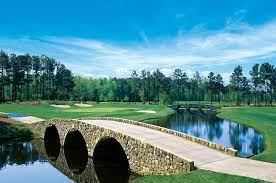 Maybe no course up and down the Grand Strand has hosted more international players – especially in large groups – than World Tour. And while it would be easy to think it has to do with the proximity to the airport, that’s just a friendly coincidence. In reality, the replica design is a contrast in semantics, as there is basically nothing like it anywhere in the world.

But, yes, you can hang a right out of the parking lot at World Tour and just follow it until you hit the airport entrance. That’s a nice bonus for those who don’t know the area all that well. River Oaks (pictured right) has a number of holes where simply looking up will give you a good view of the planes coming and going from MYR. The flight path practically goes over a chunk of the property, and it’s a good reminder of how close this sucker is to the airport.

As such, it gets its share of last-minute rounds (it doesn’t hurt that it’s extremely affordable) for those popping in or out of Myrtle Beach by air. Even without a car, you can get from here to the check-in gate via an Uber and it only cost you a few bucks.

Ralph Fiore says: “I played there today with my golf club, The Double Bogey Blues Golf Club. The course was in fantastic Shape. We will be playing there often.” If you were to a straight line from the clubhouse at Arrowhead (pictured right) to the parking lot at the airport, it would be much shorter. That pesky drive to navigate the Intracoastal Waterway, however, adds some serious mileage (we’re joking, of course).

Arrowhead’s 27 holes have remained a great morning option for those with afternoon flights home because nine holes is always an option, too. The Cypress, Lakes and Waterway nines are all great standalone options. Or, if you have time for the full 18, any one of them complements the other two.

Jim Black says: “One of the most underrated courses down there!!” 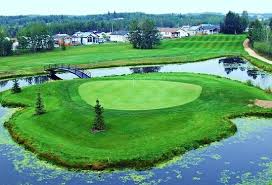 entertainment option. This was before the area became an internationally known golf vacation spot. Expanding it to a full 18 eventually just made great sense.

Bonnie W. says:  “This course was challenging yet fun to play. The water was tricky enough to loose more than a few balls so pack extra!”

Should you want to book a tee-time at any of these golf courses or any others along the Grand Strand, please contact: